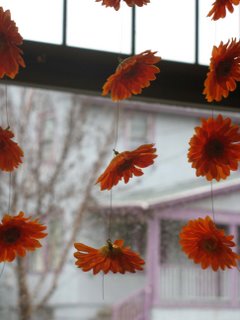 We drove by the old place yesterday. It looked like any place: a yellow house with green eaves. They took my curtains down, the new people did, or I did before I left. Brown in the front yard, brown in the grass. The front door was wide open.

But I wasn't looking at the house. I was looking at the back porch, which you couldn't see from the road, except the wind was strong, and there was a blue glass ball hanging from fishing wire on the back porch rafters which swung out over the driveway. I hung it there; I remember, and apparently I forgot it.

I resisted the urge to get out of the car, walk up the driveway skirting my old neighbor, Jeffrey, the gay church pianist I loved until the Bush/Cheney sticker appeared on his car. Jeffrey, I gasped, alone at the dining room window. No!

To march up to the back porch, past the wild dark mint, through the backyard with its overgrown grass and blighted plum tree and tomatoes, past Jeffrey and his rescued cat Dumbledore, up the rotting steps, onto the fenced porch with its white floor and blue ceiling, the porch which used to hold old movie seats ripped from a theatre. And then for a summer held me on a sagging lawn chair, me in shorts, me with sunburn, me with freckles, me with wet hair after a run, me writing all day, beginning the beginning of this novel-thing, beginning the beginning of this next part. Here.

What else did I forget, not move when I moved? The white-washed lantern, the rug, my friends, the way around?

Sometimes I thought I'd never see you again, he said.

I don't want anyone to feel that way. I had a tea party with a friend's two year-old, and the theme of the tea set was ladybug!. The kettle and the tiny cups and saucers had red and black bugs on them, and elipses, and the script: Ladybug, ladybug, fly away home.

I remembered what else I had forgotten: a song, with that line as its chorus, that old violent saying, one of the first I worked on at my mother's broken piano. I was fifteen or sixteen. I was just understanding that you could write things--songs and poems and things--about your life, that it didn't have to be someone else's story, that you had a story, that I did. I was very thin and had long long hair, and Rob kept coming over to tell me things, what he wanted.

What I'm trying to tell you, I told my friend, is that you don't have to be unhappy. Don't have to give up on yourself.

There are better ways to say this, friend, ways in poetry and in baked goods, in touch and in song. I forgot about some of those ways. I loved them and then forgot to do them--not how; the gray brain matter in my fingertips remembers how, or would if I let it. But I forgot that I love to do these things, playing music, and writing real letters, and baking pies, and growing greens, and painting terribly, and sewing worse, and rising early, and running in snow.

Fly away home. Your house is on fire. Put it out, or don't. Let it burn, higher, higher. But do something. I will too.
Posted by Alison Stine