Happy Halloween. I have a complex relationship with ghosts. Because I don’t believe in ghosts, or say I don’t, but here is the truth: In New York, I saw things no one else seemed to: an 8-year-old struggling with a suitcase on the subway, a teenager eating out of the trash. People stepped over other people sleeping on the sidewalk as if they weren’t even there. New York will make you believe in ghosts. It will make you feel you are invisible, and the things that matter to you (safety, justice, equality) are elusive, flitting, shades. You can’t see these people, I was told. Put blinders on. But I could not.

Because I don’t believe in ghosts, or say I don’t, but here is the truth: I once lived in the servant quarters of a Civil War-era house, a house that had been empty for over a decade before my landlord half-heartedly fixed it up. And the first night I slept in the long-abandoned house, I swear a voice whispered above my head: She’s still here!

The voice wasn’t frightening or threatening. It sounded sort of impressed. 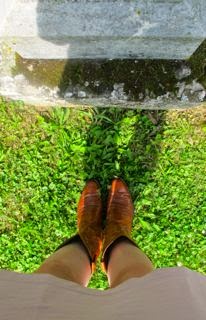 New York was hard for me. When I left to come home to Ohio, I decided to surround myself with comforting things. We always had a piano growing up, and I played. It’s been my dream for years to have my own. So in Ohio, I answered an ad. The piano for sale was located in a small town about 30 away from my own small town. When I expressed worry about finding the house, the woman on the phone said: Oh, you’ll see it.

And I did, off the Appalachian Highway, after trailer after trailer, the house on the hill was unmistakable: a mansion. But a mansion in ruins, the home of a former coal baron. And the piano was for sale—cheap!—because the family was moving, couldn’t afford to keep renting the mansion, for the heating bills alone. The ceilings were 15 feet high. There was a ballroom. Marble fireplaces. Bats. The piano itself smelled like cigarettes. The keys stuck. There was a black candle wax stain—but as soon as I saw the house, I had to have the piano. Because there were stories linked with the house, and though I didn’t learn specifics, I learned: “There’s a tunnel under the house. It’s haunted. There’s a pond out back. It’s haunted. The barn is haunted. The ballroom...”

I bought the piano. Still, I would drive back by the house, many times, an hour round trip, just to stare at its dark windows from the road. I felt compelled to return. I was in love with the house, in awe and afraid. So, like I do when I’m afraid, I began to write. I wrote about a girl who didn’t belong in New York, but there was another, darker reason she would never belong anywhere. I thought of my friend who introduced me to Victorian Spiritualism. I thought of my friend who introduced me to her daughter. I wanted to write a book for her daughter and other kids that would help them feel strong and capable and not alone, feel loved and comforted.

I don’t believe writing is magic. It’s hard work. It’s hard work, every day. But I also don’t believe I'm in it alone. These stories come from somewhere: history, family, the land. My piano. It never stays in tune. It’s really, really heavy. And I will drag it around with me forever. It’s because of my haunted, smoky, heavy old piano that another dream came true for me.

Look, everyone who wants to make stuff has a different journey. Most of them are really long and difficult. But I believe this journey is accompanied. I get lonely sometimes. But I believe I am never alone. All this is to say: I wrote a ghost story, and now, you can actually pre-order the darn thing, which is what I set out to tell you in the first place.