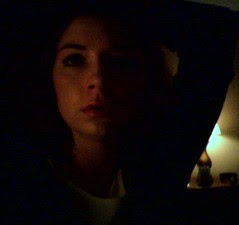 don't make me come to vegas
Originally uploaded by an awfully serious girl.
In which our heroine finds herself in a $29.00 hotel room in a casino just over the line with a $5 chip in her pocket and a half-empty tube of lipstick in her hand.

She pulls gulf shrimp from their shells.

She has no idea what time it is.

She asks the waiter for cabernet, but he doesn’t know what that is. English is no one’s first language, which she appreciates, so she writes it down for him, spells it on a napkin, and when she gives him $5, he tries to bring her change.

She narrowly avoids Disaster in the elevator.

Disaster is wearing a wife beater and has a friend and has been drinking, but Disaster is shorter than her. Also, she has studied kickboxing, after a little incident we like to call “The Walk Home in College Park, MD.” Also, she has a degree in withering looks, which she applies in the elevator.

In the room, which looks over the dark atrium, the strains of the casino songs can just be heard, muffled, good songs from Dylan and Patty Griffin.

“It’s not dark yet, but it’s getting there.”

In the room, she scrubs out the deep, round tub and takes a bath, because our heroine takes baths, spills the free shampoo into the water and pretends it’s bubbles. She wishes the tub were heart-shaped. She wishes the bed were heart-shaped. She considers her face in the mirror: heart-shaped, purple circles, her cheeks are sunburnt a little now. She wonders how old she looks. She’s beginning to realize she is no longer a girl.