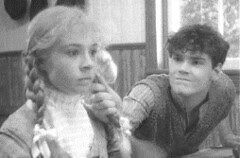 Someone said to me recently:we are not characters in a story.

Ah, but I think he suffers.

We are all characters in a dark comedy. Everything is a story: every leaf, every cigarette, every old man at the library, every baby at the park. Some of them just haven't been written yet.

I am a heroine, I know it: running in the big city, wanting to do something good. I think it is in me. I try.

I told a friend as we walked through the Mission of the Tales of the City books, set in a San Francisco the author made up. It's Russian Hill, but there's no Barberry Lane, except people go looking for it, except I think I found it, late last night, early morning, after the Halloween party, taking a shortcut to the car. This way: a right turn from the sidewalk, seemingly into the shrubs, the darkness which became stairs, flights of fancy, flights of stone twists, overhung with flowers, houses, mist; the streetlights, teetering on heels. You don't know about the San Francisco stairs? they asked.

Here they are. I do now.

In my life, I have a Mouse, a Michael Tolliver, a babycakes: an artist with a husband and pets and a home of warmth, blueberry muffins, wine, paint, strength.

I have a good Gatsby (I believe in you, Gatsby). There is Puck, I call my other brother. When he shows up, the moon comes out. We plant plastic pink flamingos in professors' yards.

And so many more, so many whose patience, love, character, deserve a story. I will write them for you. If I could craft an ending, I would. I will.

And then: he snuck up on me. He came out of nowhere. He came on a bicycle with a mixed CD and a silver thermos of green tea.

I have a Gilbert Blythe, a doctor from a small town, who never called me carrots, but does call me round-face, and every morning when I woke up late, there it was: tea on the counter, so I could live, so I could write.

I won't go so far as to call it a crime against humanity, he said, if you didn't write, but it would be close.

And I know you hate Anne of Green Gables because it's Canadian and because it's Victorian, and because it's a myth, but it's my myth, and I give it to you, me the girl in the raincoat on the big stairs, writing in her book with traffic at her back, writing so she can come home, find home, make home, writing.

I have an oracle in Ohio, whose grave I visit, leave a stone each time.