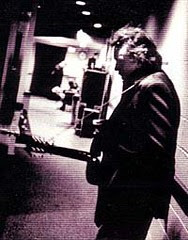 In fall of 2003, I was eating breakfast in my house in Michigan. The windows were open, the cats were in the windows. I turned on the television. I saw a music video: a old man sitting at a table, playing a piano, a guitar, a big house, a closed-down museum, an old beautiful woman.

The song was “Hurt,” and the man was Johnny Cash.

Johnny Cash was born in Arkansas. His older brother died in childhood. His father was abusive and alcoholic. He listened to the radio and sang in church. On a school trip to the Grand Ole Opry, he saw former child star June Carter, and told his friends he was going to marry her. He joined the Air Force at eighteen, and four years later, married a girl he had met at the roller rink before he had shipped out. Overseas, he started writing songs. Upon his return, he worked as a door to door salesman.

What he said, when homeowners opened the door, was: Hi. I’m JR Cash.

He formed a band made up of two auto mechanics, auditioned for Sam Phillips, and got a deal with Sun Records. His first tour was with Elvis, Jerry Lee Lewis, and June Carter. He met her backstage at the Grand Ole Opry when he was tuning his guitar. He got down on his knees and asked her to marry him.

Both were married to other people at the time.

He was addicted to amphetamines, tranquilizers, and pain killers. He was arrested for possession. He got divorced once; June, twice. His 1963 hit “Ring of Fire” was written by June about her anguish over being in love with a married man.

He was attacked by an ostrich. He tried to kill himself by crawling into a cave. He found religion. He recorded a live album in a prison. He took out a full page ad in Billboard after he won a Grammy which featured a picture of him flipping off the Nashville music scene and country radio.

He was father or stepfather to seven children: six daughters and one son. He asked June Carter to marry him, onstage, in 1968, and she said yes. They were together more than thirty years until she died in 2003. He followed her a few months later.

And I, I grew up wanting. I grew up in Georgia. I grew up without heroes. I found them as a young adult. I found them in a poet who grew up in a factory town, and a pianist who had been raped, and a songwriter who lived. My heroes lived, and the things they wrote, lived, and I want to live. I don’t want to write a good poem. I don’t want to write a good story. The world has enough good things. I want everything I write to be the best thing I possibly can, the only thing I can, a thing that I will die unless I get out. I want everything I write to save someone’s life. Poems can do that, and songs, and novels. I want to do that. Otherwise, why bother? Pretty is not enough. Nice is not enough. It must be life or death. It must change you.

So go see Walk the Line. Go get Cash’s albums, especially The American recordings, where he covers songs from NIN and U2 and Depeche Mode, and owns them. Go get a guitar. And write the man a poem, write the man a song--but not a good poem, not a good song. Write the best thing you can, the only thing you can. Write as a way to survive, to save. And live, and live.

You have five minutes. What are you going to say?

I am going to say this.
Posted by Alison Stine