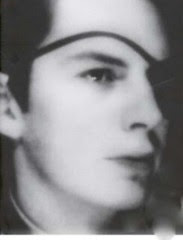 Let me say I did not like his writing. Let me say I heard him read five years ago, at Georgetown. My friend Annie had just broken her foot. I met a poet named Brian there. We would later drive to Vermont together, to a writers’ conference--ten hours, and I was sick from nervousness, so mostly he drove, and we only had one David Bowie CD, one CD for ten hours.

But first, it was snowing. It was cold. It was November. I was flush and in love and wearing a wool coat.

And he took off his glasses to wipe at his eye, his bad missing eye, with a handkerchief.

Then, this spring, he died.

I spent Saturday, all day, at a symposium on Robert Creeley. I was tired. I was wearing too much makeup. I was writing a poem in my head; alternately, a grocery list.

And I began to listen and to think of him not just as a poet—what a stupid word, what a stupid thing, I hate that word—but as a man, as a person. Someone loved him, someone lost him.

He wrote it down.

I began to think not just of this writer, who I didn’t know, whose work I really don’t know well, but the writers I do know, specifically: two teachers of mine who died years ago: Richard Kraus and Paul Bennett.

They were not supposed to be my teachers. They were retired, but every Thursday night we met in the honors dorm with other students and had coffee and cookies, the leftovers of which they pressed into my hands, wrapped in paper napkins. Every damn Thursday. They spent their retirement listening to my bad poems. I used to fret at Thursday dinner: did I have a poem ready for tonight? If I didn’t, they would be disappointed—not because it was an assignment, not because they wanted to critique it, but because they just wanted to hear it. They liked to hear me read. They were there for the love for it.

They didn’t teach me anything, except: live.

I started to cry. I think I hid it all right. By now, it was evening. I watched the sun drain from the beveled windows, behind the glass, behind the mountains.

I have had many teachers, some of them famous, some of them. But it is those two I feel behind me at my desk. My shoulders hurt. I’m tired all the time.

Those two never let me down.

His favorite expression was: Onward!. I couldn’t say a word. The evening ended with a reading: Robert Creeley reading from a recording, a black CD player on the stage. The microphone on the podium was empty, a ghost. His voice was still alive. It filled the room.

We were talking of poems on Thursday at the bar, talking, talking, and a new friend said he’d heard my poems were personal. I thought for a moment, stirred the sugar in my gin drink.

They’re pleas, I said. They’re letters. What do I want you to know? What can’t I say? Why can’t I say it?

Have you ever looked at someone, and suddenly you see them as they will be when they are older; you see them age before your eyes? That’s happened to me a few times. Once with someone I would love, although I didn’t know it then.

I don’t want it to be too late.

It’s all right. I’ll begin. I am already beginning.
Posted by Alison Stine