lay your book on my chest 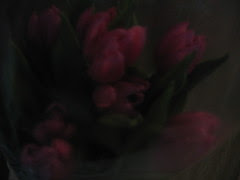 Mostly when I stepped from the U-Haul, I crossed my arms and bit my lip and thought, No. I looked up at the brown building I would christian the Frank Lloyd Wrong House.

You're exactly where you need to be, my friend used to say when I was twenty-four and teaching high school. It was a phrase borrowed from auto racing. Right where he wants to be, he would say before his favorite driver made a move, when he was down in the pack.

But sometimes he didn't make a move.

I hate you, I said aloud to my novel Friday. The coffeehouse was stacked with babies and women arguing in Spanish, and though the proprietor let me smell a bouquet of orange tea roses, I couldn't write a thing.

I don't know if I'm exactly where I need to be.

Coming home late, I went through the kitchen and saw my desk: the chipped chair, red and pink Mary Janes kicked off under the legs, the world through the green voile curtain. Beach stones on the windowsill. The moon. This is San Francisco, exactly how it needs to be, exactly how I thought it would be.

I'm at this moment. I'm in it, which last night was a dinner party in Oakland and a dark vampire bar and a long, rainy drive across the bridge. And this afternoon was tea at Happy Donuts with three friends and talk of novel-writing. This moment, before I make my move.

This morning was a run in the park, in the finally clearing paths. Stepping around mud, I saw a bearded man in what looked like long johns, white and saggy, and rubber boots, attempting to take a picture with an old fashioned camera, plates and everything.

I walked carefully behind him.