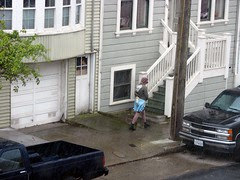 For an extended time this afternoon, a hot pink ice cream truck was parked inexplicably in my driveway.

I wanted a picture but I was afraid to lean down and take it. The drug dealers across the street were watering the stairs.

For a short time this afternoon, rain poured, and a girl with short purple hair, a blue waitress uniform, and fishnet knee highs paused in the overhang across from my building, and pulled her bomber jacket closer, and looked up at my window, and seemed to visibly sigh. I wanted to bring her an umbrella. I have five, all broken. Or blueberry tea. I wanted to take her picture, but I waited too long and she started walking toward the subway.

Home from the park, I found a stereo on the sidewalk. I considered. If I lugged it up to my apartment, to my bedroom, it wouldn't work. I remembered what our elderly neighbor said years ago; I was ten and bought a skateboard at a garage sale: I watch you everyday from the window to make sure you don't fall down.

I lugged the stereo up to my apartment. It works. I was also given the nicest Post-It note from an editor ever. I was also surprised in the hallway to see I had left the light in my bedroom on; light blazed from the door, but then I opened the door to find no lights but real lights: the unbelievable sun beating from above, through the circus curtains (cloth studded with silver). I was also given that.

There's no one watching from the window to make sure I don't fall down.

If we're ordering things up, world, I would also like a red-painted bench for my piano, sunshine, bookcases, a poem, a song, plane ticket, some chips.

And then she said, you are only getting better.
Posted by Alison Stine