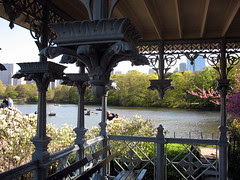 I have to get two new songs ready in a little under two days.

You didn’t know I did that, did you? Well, I do, sort of. I used to, in the way I sort of used to do many things. I have big ideas. I have big plans. I am less clear on how to finish the plans. I have a novel, a poetry book, stories, essays, half a dozen plays, half a dozen musicals, a hundred songs, a million poems, a comic strip, a nonfiction proposal, a cure, and an opera I can sell you.

What makes me think I can do it: the boy in the park on the swing set who begged for a push from his nanny, and as I walked by, got one, and closed his eyes and swung and called: I’m Superman!

What makes me think I can do it: the gardener’s truck parked on the street by the secret garden house, in the bed of which flowers are growing. I looked in as I passed. It is a very old truck, and in the wood slats in the back, amid the rakes and the ladders and the paint cans and the rags, dirt must have spilled, and seeds. Green and blooms, yellow and pink, are coming right up, right inside the machine of the truck, in lovely almost-rows. I picture their roots twisting around gears.

What makes me worry: three girls on the playground of the junior high. Two were kneeling in their plaid uniform skirts next to a third, who lay down between them, eyes closed. I think they were trying to play "Light as a Feather, Stiff as a Board" on the playground asphalt. I watched until they all stood up, pushed off their skirts and straightened their ties. Everyone seemed fine.

I feel the sun and the wind and the weather.

I hear him saying You have to believe those thoughts, and just own them. All right, darling. Here I go owning.
Posted by Alison Stine