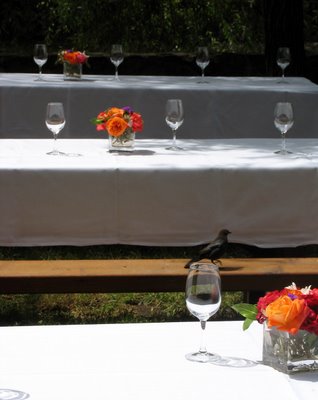 I was concerned to learn that this morning there was an earthquake in Northern California, just a small one, less than five, no injuries. It was in the same county, a little south of San Francisco, where I had the world's best Vietnamese food in an unassuming strip mall. Pho, spring rolls, and tea for under ten dollars.

The first time I went, my computer was being repaired in the store next door, and I was distraught: three repairs in under a month, the first costing much more than I could afford. I ordered some soup to go; it was an hour and a half drive home and raining and I just wanted to write, and the woman told me to sit down and brought out some hot green tea while I waited. She patted my hand as she set the cup down.

The morning I left San Francisco, a construction worker walking along the street, red hair, hard hat over his eyes, said: What's the word, little bird?